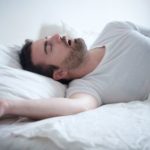 A good night’s sleep is important. In fact, your body can’t survive without sleep. But what if your quality of sleep is poor and you’re waking up several times a night without even knowing it. This is an unfortunate but common situation for those who have sleep apnea. According to the National Sleep Foundation, an estimated 18 million Americans suffer from a serious sleep condition called sleep apnea. Considering the critical role that sleep and breathing play in our body’s overall function, untreated sleep apnea does not go unscathed.

What is Sleep Apnea?

Sleep apnea involves the cessation of breathing during sleep. During the night, the upper airway muscles of sleep apnea sufferers become relaxed and often vibrate against one another, which creates the audible sound of snoring. However, snoring is not the danger when it comes to sleep apnea. As sleep deepens, the airway muscles further relax and can block the airway. This restricts oxygen to the lungs and signals the brain that suffocation is occurring. In turn, the brain lightens the level of sleep so that the body can control breathing and restore oxygen. It is not uncommon for patients to wake up gasping for air several times a night in response to this cycle of events. Unfortunately, the constant exchange between suffocation and arousal that happens with sleep apnea can drastically decrease one’s quality of sleep as well as compromise overall health.

If you don’t have a bed partner to inform you of your sleep condition, you may experience daytime symptoms such as:

If left untreated, sleep apnea can increase the risk of several health issues, some of which can be life-threatening. The importance of proper treatment is imperative, as sleep apnea sufferers may be susceptible to the following:

How a Dentist Can Help

Dentists are often the first medical professionals to detect the signs and symptoms associated with sleep apnea. A dentist may notice anatomic defects around your upper airway or throat irritation and worn teeth commonly linked to sleep apnea. Fortunately, a dentist can also treat sleep apnea, especially if you want to avoid a bulky CPAP machine. Ask Dr. Thompson about our proven oral appliance therapy that is design to keep the airway open and prevent sleep apnea episodes. This simple appliance worn during nighttime sleep can protect your overall health and boost your quality of life!